This PEI Mussel Poke recipe is an easy mussels recipe that is bursting with Thai-inspired flavors. Perfect as a mussels appetizer or a quick dinner!

This post was written by me through an activation with HireInfluence on behalf of the Mussel Industry Council of Prince Edward Island. Although I received compensation for participating in the campaign, all thoughts and opinions are my own.

On one of those rare days when I had time to wander through the grocery store I stopped by the seafood counter to see what they had in stock and I wound up coming home with 2 pounds of fresh PEI mussels. If you’ve never heard of PEI it stands for Prince Edward Island which is located in Canada and it’s where these mussels are raised.  They are the #1 selling fresh mussel in North America so chances are if you like mussels you’ve probably had them. 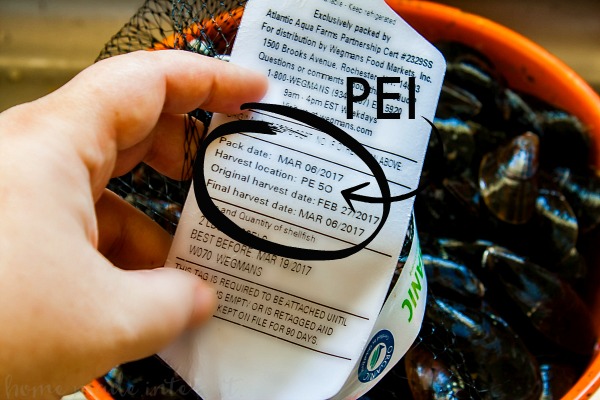 PEI mussels are affordable, tasty, and also sustainable. In fact, the Prince Edward Island aquaculture industry is one of the most sustainable industries in the world. PEI Mussels start out as mussel seeds collected from the wild, not hatcheries, and they are grown on collector ropes suspended in the ocean. They eat natural food particles in the water and the way PEI Mussels are produced and processed only has a gentle and positive effect on the environment. They are also seriously delicious so it’s a win-win! If you’re looking at mussels in the store and you aren’t sure if they are PEI mussels you can check out the tag (ask the person behind the counter if you need to ). Any mussels from PEI, will be identified on the tag as Harvest Area: as PE with numbers after it. 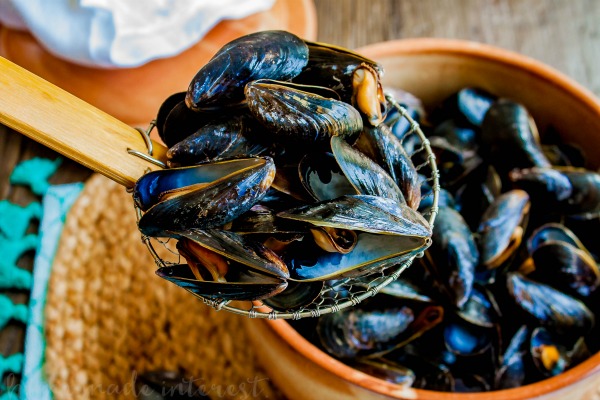 Mussels are super quick and easy to cook, and they are really versatile. A mussels recipe can be anything you want it to be with the addition of a just a few simple ingredients. I went the Asian route with mine. I’ve been seeing poke recipes everywhere lately and I wanted to give it a try. Poke is raw fish salad that traditionally is made with tuna or octopus but I figured why not give it a little twist and make it with mussels. 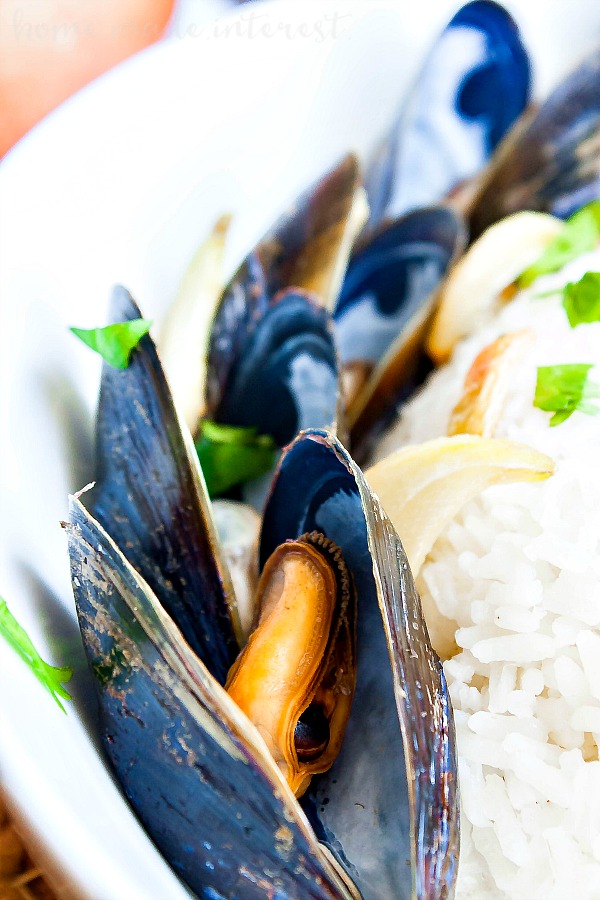 PEI mussels are already really clean and have had the beards removed which makes them even easier to use. All you really need to do it rinse them with some cold water and then check to make sure they are all good. If you come across a mussel that is open tap it against the side of the bowl and it should snap closed. If it doesn’t then throw it away. Do the same for any mussels with broken shells. Then it’s time to start cooking. Steaming mussels is really easy and you can use different liquids to give them different flavors. I wanted to make a Thai-inspired mussel poke recipe so I sauteed some onions in sesame oil then I added a little coconut milk to the hot pan, brought it to a boil and dropped in my PEI mussels. I covered the pan with a lid and let them steam for about 6 minutes until all of them had opened up (that means they are done!). 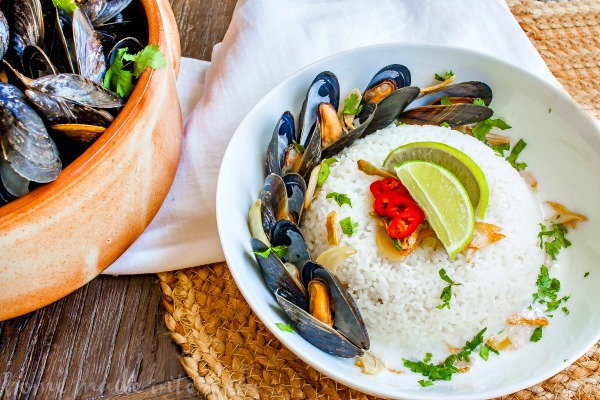 While they steamed, I mixed together the rest of my coconut milk, lime juice, fish sauce, a little salt, and a few slices of Thai chili pepper (a little goes a long way). When the mussels were ready I placed them in a large bowl, poured the poke liquid over them, and gave them a toss or two to make sure they were coated in all of those amazing flavors. Then I garnished them with some fresh cilantro. They are ready to go at this point and you can dig right in if you want to but I served mine around white rice so the rice can soak up all of the juices. Pull a mussel from it’s shell, scoop up some rice covered in poke liquid and you have the perfect bite exploding with bright, fresh flavors!

Make sure you take a minute to enter the #PEIMusselsOnTheMenu Giveaway. All you have to do is vote for your favorite mussels recipe and you’re entered for a chance to win a trip for 2 to Prince Edward Island, Canada!!
The Grand Prize includes a flight for 2 up to $1,000 Cad each including tax, 5 nights hotel up to $1,500 Cad, Car rental up to $500 Cad, and $1000 cash Cad. Pretty awesome right?! You can vote once every 24 hours so don’t forget!

This PEI Mussel Poke recipe is an easy mussels recipe that is bursting with Thai-inspired flavors. Perfect as a mussels appetizer or a quick dinner! 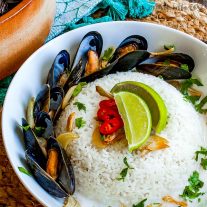 Nutrition Disclaimer: We are not certified nutritionists. Nutrition facts are an estimate and are provided as a courtesy. They are generated by an online API which recognizes ingredient names and amounts and makes calculations based on the serving size. Results may vary.
Author: Kat Jeter & Melinda Caldwell 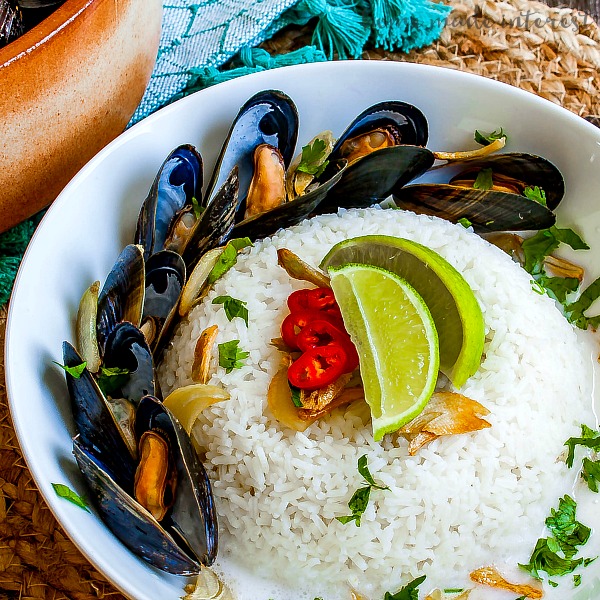 PEI Mussel Poke is delicious, healthy, and shareable. Make it as a mussels appetizer or a quick weeknight meal either way I promise you won’t be disappointed. Next time you’re in the grocery store grab some PEI mussels and give it a try! 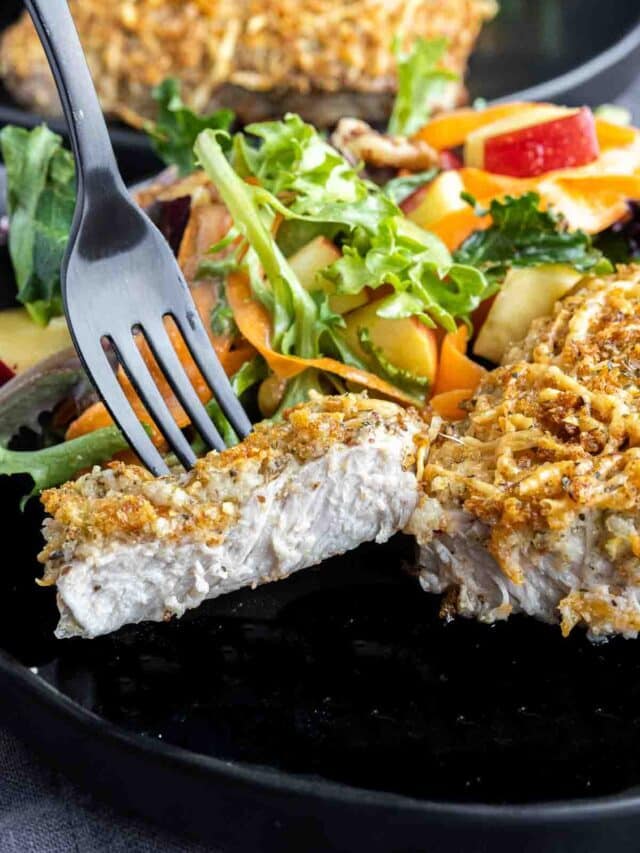