This Red White and Blue Zinger Cake is covered in shredded coconut and filled with a marshmallow cream to make the BEST 4th of July dessert recipe!

Summer is flying by isn’t it?! I just got an email from our city’s fireworks committee about when this year’s 4th of July celebration will be. The 4th of July is a big deal at my house and big deals mean celebrating with delicious cakes like this Red, White, and Blue Zinger Cake! Just look at those red, white, and blue layers. It’s going to be the BEST 4th of July dessert! 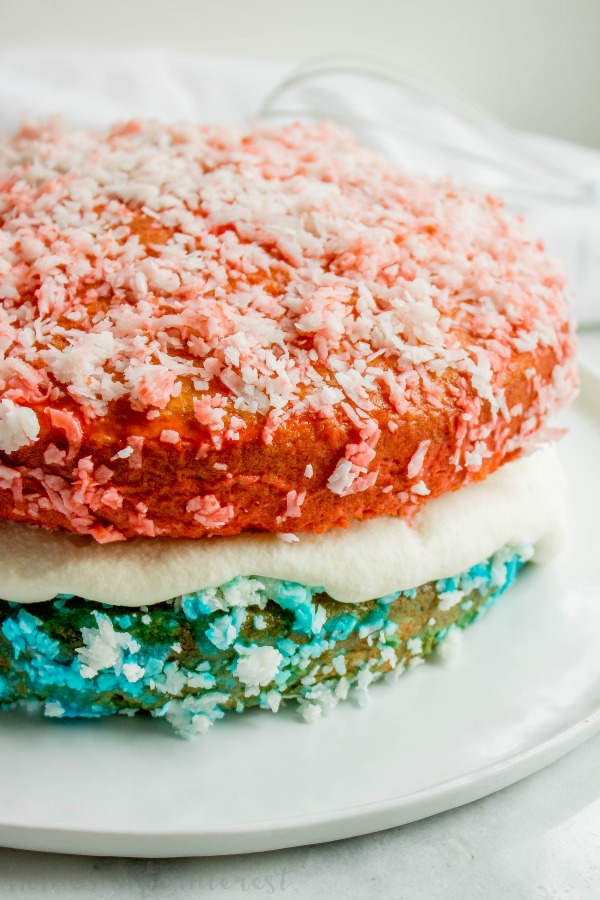 Melinda came up with this cake after seeing a raspberry zinger cake recipe online. If you don’t know what a Zinger is it’s an American snack cake made by Hostness. It comes in  devil’s food, vanilla, and raspberry flavors and all of them are filled with a vanilla cream. When Melinda say that raspberry zinger cake she immediately wanted to turn it into a patriotic red, white, and blue cake. I’m not gonna lie, I was a little skeptical right up to the point where we cut into it and I took my first bite. It looks so awesome when you cut a slice. The red white and blue lines show up so clearly, and it tastes amazing! Like, I should have just tried a few bites but I ended up eating a whole piece kind of yum! 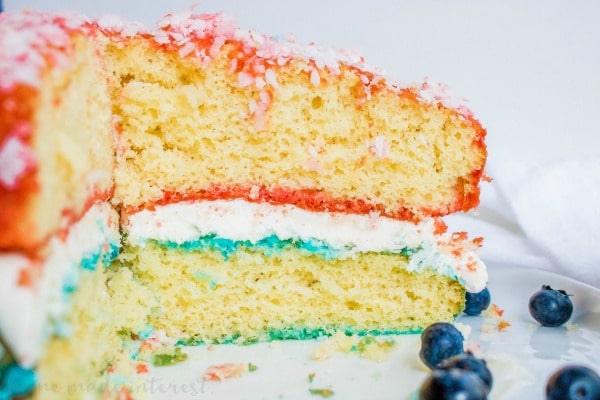 The Red, White, and Blue Zinger cake recipe is pretty simple but it takes a little bit of time so I suggest making it the day before. The cake batter is just a doctored up boxed cake mix with a little powdered vanilla pudding and an extra egg to make it extra moist. Once the cake has baked let it cool completely. While it’s cooling you can chop up some sweetened coconut flakes, pulsing them in a blender with a little cornstarch to help them stick together less. Set that to the side and about 15 minutes before the cakes are done cooling make red and blue gelatin. I used raspberry and blue raspberry but you can use any flavors you like as long as they are red and blue. Make the gelatin and pour it into a large flat pan to cool. Whatever container you use you’re going to want to make sure your cake will fit in it because we’re going to be dipping the cake in the gelatin. I used two large brownie pans. The gelatin then goes in the fridge to thicken up. You want it to be thick so it coats the cake but don’t let it solidify. We put ours in the fridge for about 15 – 20 minutes and that was long enough.

When the gelatin comes out of the fridge the fun begins. This can get a little messy so prepare yourself (or wear gloves). Take out a cookie sheet and sprinkle it with half of the shredded coconut. Then take one of the cakes and dip it into the red gelatin. Do the top, then flip it over and do the bottom then gently roll the sides in it. Once it’s coated lay it on the coconut flakes top down and then flip it back over and use your hands to coat the top and sides with coconut. Don’t worry if it doesn’t stick to the sides great. Just press as much in as you can and don’t worry about it. Repeat with the second cake and the blue gelatin and place both in the fridge for about 10 minutes to let them firm up a little. 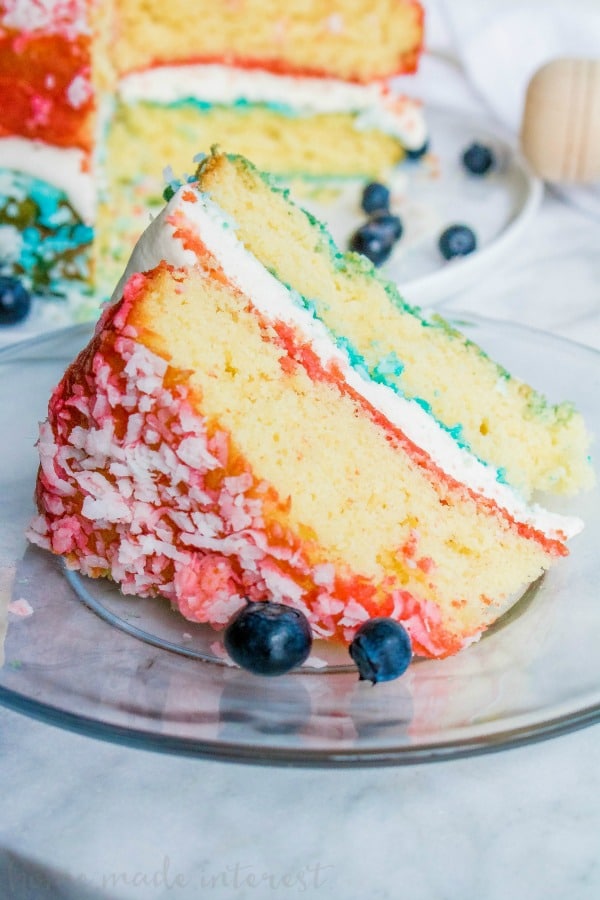 While the cakes are in the fridge make the frosting. It’s a simple marshmallow cream that is totally delicious. Mix the ingredients up and put the frosting in a piping bag before placing it in the fridge to cool for 10 minutes. You don’t have to do this step but our frosting ran more than we wanted so we found that cooling it helped it stay in place better. When it has firmed up a little (you still want it to come out of the piping bag easily) you can take the cakes out of the middle and assemble your Red, White, and Blue Zinger cake. The frosting only goes in the middle so draw a circle on top of the blue cake, fill it in with frosting and place the red cake on top. Then wrap it in plastic wrap and place the zinger cake in the refrigerator overnight or for at least 2 hours.

I can’t wait to serve my Red, White, and Blue Zinger cake as my 4th of July dessert! I may even put some sparklers in it for the full patriotic cake effect. Sparklers or no sparklers I know this cake is going to disappear fast!

If you’re looking for other great 4th of July recipes try these! 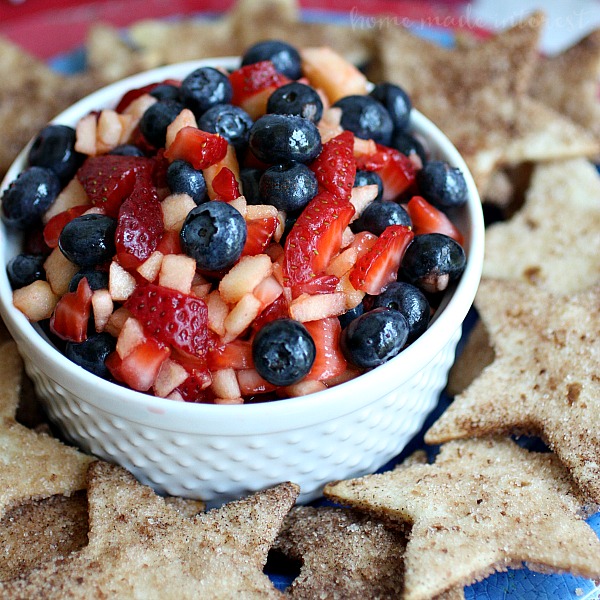 Red White and Blue Cupcakes in a Jar 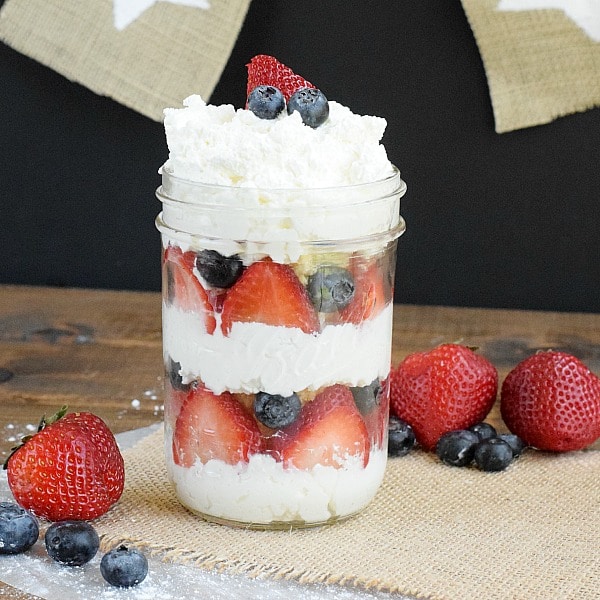