This post first appeared over at Real Housemoms where I’m a contributor.

Summer is flying by! The kids and I have been having so much fun. Our days have been full of swimming at the pool and playing in the sunshine. I couldn’t have asked for anything better. All good things must come to an end though and fall is just around the corner. That means back to school shopping, getting the kids back into a normal bedtime routine, and baking. That last one is my favorite. I don’t know what it is about fall that makes me want to bake muffins and try out new bread recipes. Maybe it is because the house is finally cool enough to turn the oven on for extended periods of time. Whatever the reason baking is totally my fall thing and I’ve already started trying out some new fall recipes. 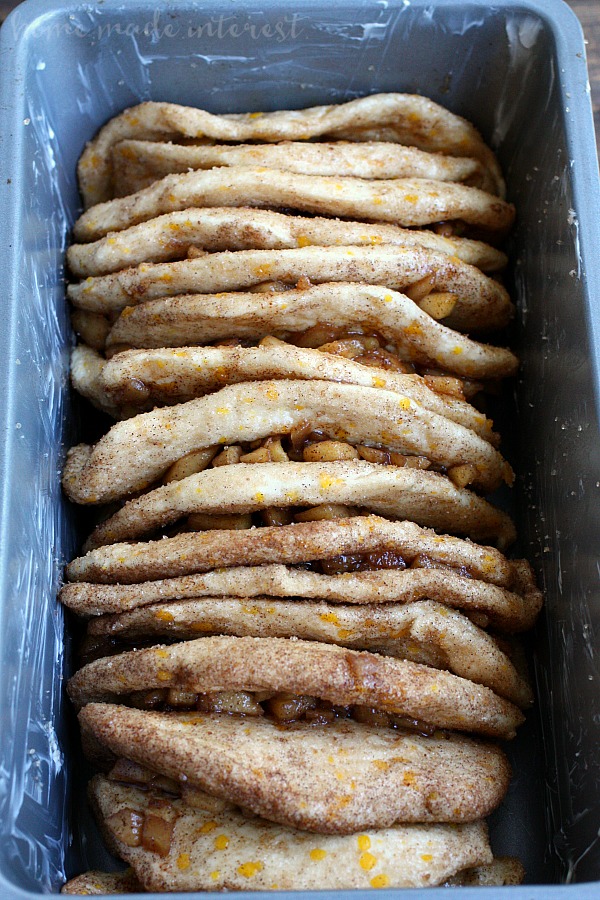 Fall is also apple picking season and I’ve been dying to try out this really simple apple pull apart bread recipe. It’s perfect for busy moms who still like to do a little baking because it uses canned biscuits. Of course you can always use your favorite biscuit recipe if you prefer but canned biscuits are a huge time saver. All you need to do is split each biscuit in half by peeling apart the layers, then flatten the dough out a bit and coat it in cinnamon sugar. You’re going to layer the dough with a homemade apple filling. It’s easy to make, diced apples, lemon juice, brown sugar, white sugar, cinnamon, and salt cooked together until it is bubbly and the apples have softened. I found that the easiest way to layer the bread was to stack it up one piece at a time, putting a layer of apples in between each piece of dough. When I was finished I picked up the stack and laid it down in a greased loaf pan. I adjusted the dough so it filled the pan and then popped it in a 350 degree F oven for 40-45 minutes. 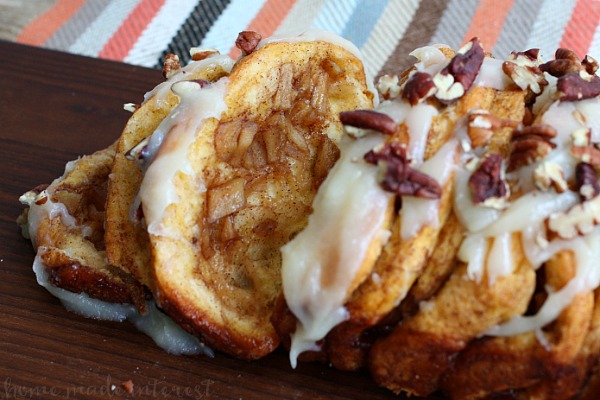 The cinnamon sugar on the dough caramelized as it baked, and the apple filling between the biscuits became ooey gooey and absolutely delicious. I topped the whole thing with a cream cheese glaze and some chopped pecans and it was quickly devoured by my hungry family that had been smelling cinnamon and apples for the last hour! 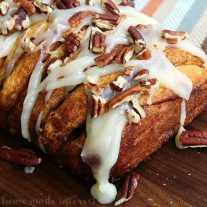