These Portuguese Rissóis de Camarão or Portuguese Shrimp Turnovers are one of my favorite make ahead party appetizer recipes.

Being Portuguese the food at my family gatherings is a little different. We have amazing recipes like Portuguese chouriço (chorizo) and Portuguese Rice Pudding (Arroz Doce) but my ultimate favorite Portuguese appetizer are these Portuguese shrimp turnovers. Portuguese Rissóis de Camarão take a little time to make so they aren’t at every family gathering but when there is a big event either my mom or my aunt are sure to be in the kitchen rolling out the dough and stuffing it full of a delicious shrimp mixture. Walking in the front door to the smell of them frying brings back so many childhood memories. This year I got into the kitchen with them and my mom showed me how to make them from start to finish and she was nice enough to let me snap some photos so I could share it with you guys. Like I said, it’s a bit of a process so I’m going to break Portuguese shrimp turnovers down into steps for you.

Note: This post contains affiliate links. This means if you click on a link and purchase a product we may receive a small commission. Thank you! 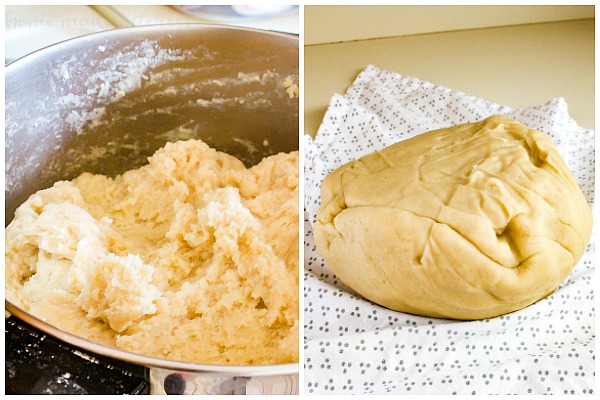 You start by making the dough. Add the water, whole milk, butter, olive oil and salt into a sauce pan and bring to a boil. Slowly stir in flour and stir quickly with a wooden spoon to form a big dough ball. Remove dough and loosely wrap with a dish towel until it reaches room temperature. 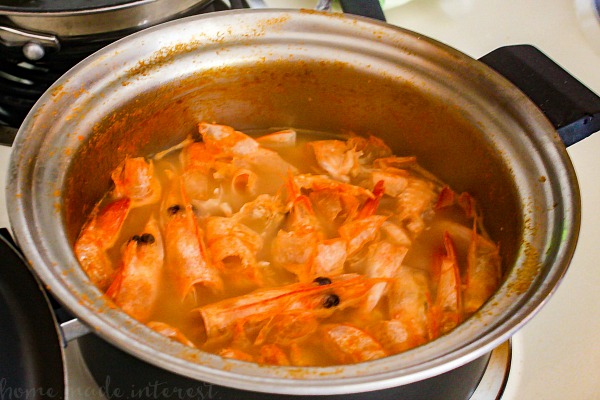 First you cook the shrimp boiling it, with heads attached, until they are fully cooked. Next peel  the cooked shrimp and remove the heads. Set the heads aside and finely chop the peeled shrimp. Add shrimp heads and water to a sauce pan and bring to a boil for about 5 minutes. This is key to getting that amazing shrimp flavor. You will not be consuming the shrimp heads, they are just for flavor. Once it is done you can strain the heads from the broth and pour the broth back into the pan. In a skillet over medium heat add oil, minced onions and 1/4 stick of butter and cook until transparent. Add milk until scalded (bringing it almost to a boil), then add minced parsley. Beat 2 eggs and slowly add them to skillet. Add 2 cups of the shrimp head broth and slowly add flour to thicken. Add chopped shrimp to mixture and slowly mix together. 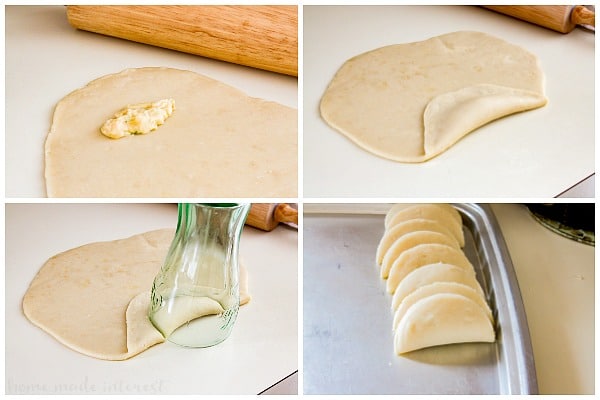 Roll out dough to 1/8 inch thickness. Add about a teaspoon of shrimp mixture onto dough in one corner leaving enough dough to flip over. Flip the end of the dough up and over the shrimp mixture (refer to picture above). Use a cup or round cutter to cut into half moon shape turnovers. Re-roll dough and start assembly process over until you run out of dough. You should have about 80 turnovers. If you are making them ahead of time you can freeze them before frying.  Line a sheet pan with plastic wrap and line the turnovers down in a single layer without touching. Cover well with plastic wrap, removing as much air as possible, then freeze. They will keep for up to a month. 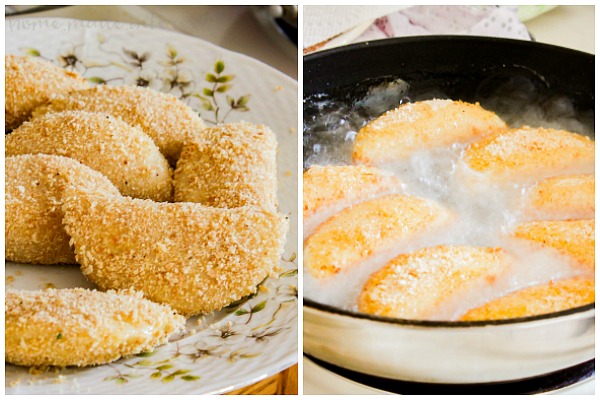 Dip the turnovers in a beaten egg, then quickly into breadcrumbs, shaking off any excess crumbs. Set aside. In a  skillet bring 2 cups of oil to 350°F. Gently place turnovers in sizzling oil. Fry until golden brown. Remove onto paper towel lined plate to remove some of the grease. 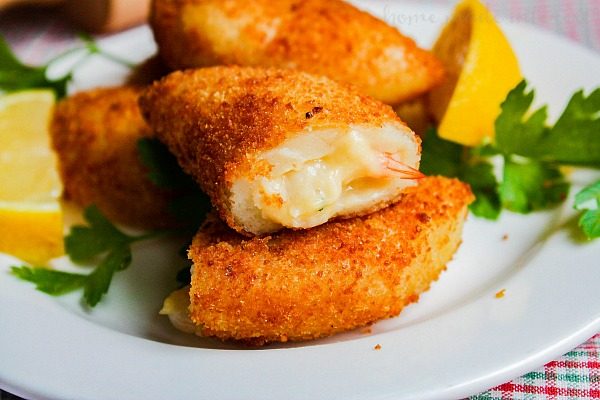 If you’ve never had these you NEED to give them a try. They are an amazing, authentic Portuguese appetizer recipe that is sure to impress your guests. Make a lot because they will be coming back for seconds and thirds! Once you try these Portuguese Shrimp Turnovers (Rissóis de Camarão) you will be craving them at every party. 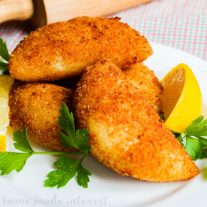